Skip to Content
All over the world we have a common problem: electronic waste. According to the UN, the mountain has grown by more than 20 percent worldwide in just five years.

What about recycling IT in German companies?
Sustainability is becoming the new standard and therefore companies must also rethink. Our partner Blancco recently published the results of their survey, which shows that many companies are destroying their discarded hardware. That adds up to hundreds of thousands of IT devices every year. How many devices are ultimately hoarded in companies out of ignorance and fear of data breaches in warehouses and basements was not statistically recorded. Most companies invest a lot of money in storage costs and, in addition to these, also waste valuable resources. Because the sale of recyclable IT can generate very good income that can be used to refinance new hardware, for example, and it saves on resources that can simply be reused. Companies could also receive up to 2.000 CO2 emission certificates per year, which on the one hand strengthen their corporate social responsibility and on the other hand convey the good feeling that they have done something for our environment by adding old devices to the circular economy. 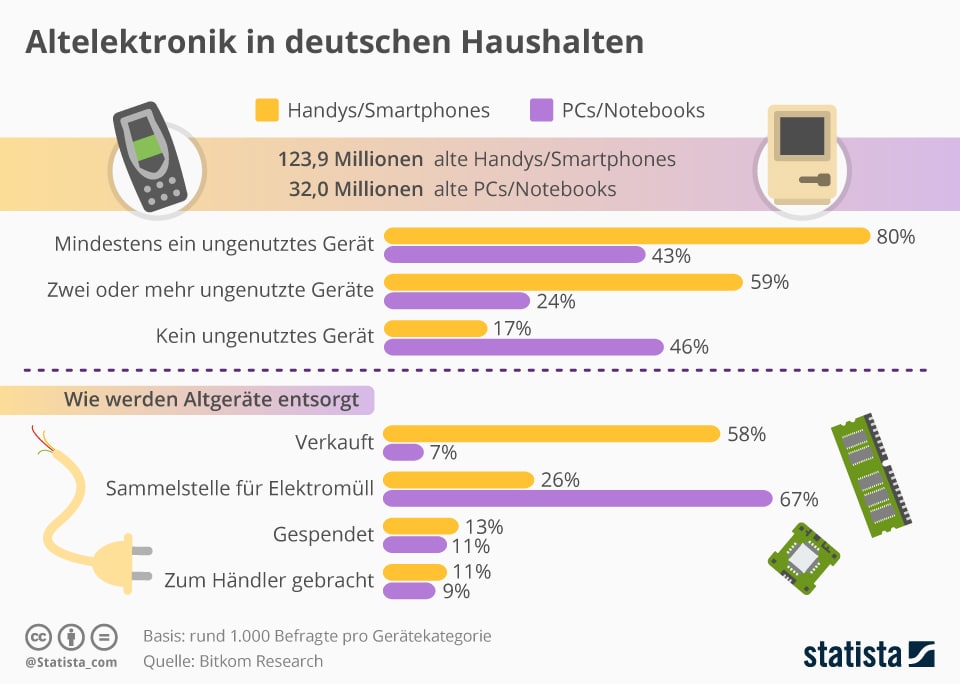 Why are so many computers still ending up in the electronic waste today?
Of course, it is not worth having a 15 year old, no longer functioning computer reconditioned. This is due to the outdated interfaces or the low capacities of old hard drives. Here you can go to the nearest collection point for electrical waste without a guilty conscience and get rid of your electrical waste.
Because at the electrical collection points, the electrical waste is properly separated into different components and then disposed of. If you make use of IT disposal, you should still delete your data from the hard drive beforehand, because IT disposal does not delete your data, but ends up in the landfill. We will explain more about data deletion in another article - unfortunately, simply deleting your files is not enough.

Raw materials and why it is so important to reuse them
It is an open secret that resources, for example for smartphones, are often extracted under questionable conditions. The production of our beloved smartphones requires cobalt and coltan, which are mined in illegal mines without any work safety in the Congo. Often this happens under extreme working conditions, exploitation and child labor. How many environmental sins are committed is not documented - but they are the order of the day. That is why it is all the more important to reduce the extraction of raw materials by reusing many raw materials.

When does the processing of alleged computer scrap pay off?
A younger notebook or a computer (maximum 8 years) can definitely be reused. This has the background that dual-core processors were used in more modern devices, which brought with them a considerable increase in speed. Computers equipped in this way are usually still sufficient for many tasks today and can be used in a variety of ways by upgrading them.

Reuse instead of IT disposal
Selling Recycling IT is even worth it twice. Because in addition to the positive effect on our environment through IT recycling, the value of used hardware has also grown in recent years due to the steadily increasing demand. So you currently receive significantly more financial resources for so-called recycling IT than a few years ago. As a company, you save a lot of time and worry with your old data and have even generated new financial resources for a new investment, for example. Only entrust your old hardware to a professional reconditioner, where you can be sure that your data will end up in the garbage data and not in the media. We explain how to recognize a professional processor in our free white paper.

Another way of reusing recycling IT: donations
If you want to get even more involved in addition to environmental protection, you can also donate your used IT. One possibility is, for example, our partner Labdoo.org. Labdoo is a non-profit aid project that uses IT donations to give children and young people at home and abroad access to IT and education. Donated laptops are reprocessed and equipped with learning software before they are transported to school projects in a CO₂-neutral manner.

Whether you donate or sell your IT: by recycling IT, electronic waste cannot be completely avoided, but it can be reduced significantly.

Why does it make sense to recycle old devices?
Through IT recycling in a certified waste disposal company, used electrical devices are separated into their recyclable materials. The aim is to conserve resources, reuse raw materials and dismantle disused smartphones, laptops or computers so that their components can be recycled. This saves the mining of further raw materials, protects the environment and reduces electronic waste through reuse. Often, however, a PC does not have to be recycled at all, but can be used for a further life cycle by reprocessing it.

Disposal and recycling - what is important?
It is important that the disposal takes place in the different recyclable materials. Unfortunately, so far only a small proportion of the often very environmentally harmful waste has been properly recycled - the majority ends up on illegal shipping routes in developing and emerging countries. Therefore, when it comes to IT disposal, care should always be taken to hand it over to a certified disposal company.

What happens with computer recycling?
With PC recycling, the device is separated into its valuable materials such as gold, silver, copper, palladium or platinum. They are broken down into the smallest components in a shredder and sorted into fractions. Glass and plastics are incinerated at a specialized recycling company. Melting down the metals creates "new" or "recycled" industrial raw materials.